Portugal is one of our favourite countries in Europe. It’s quaint, cheap and beautiful. Only one rule applies: Stay clear of Albufeira! This is your bit of England, Ireland and Scandinavia thrown together under the sun. (Please ignore this piece of advice if your idea of a summer holiday is to sizzle during the day, get wasted during the night, and pretty much do nothing else for a week or two.)

Then there is the Silver coast, or the Costa da Prata as the Portugese say. It’s located just north of Lisbon and stretches almost all the way up to Porto. Why is it called the Silver coast, I hear you say. This is a typical case of ‘a picture says more than a thousand words’, so I’ll let this photograph taken near Peniche explain: 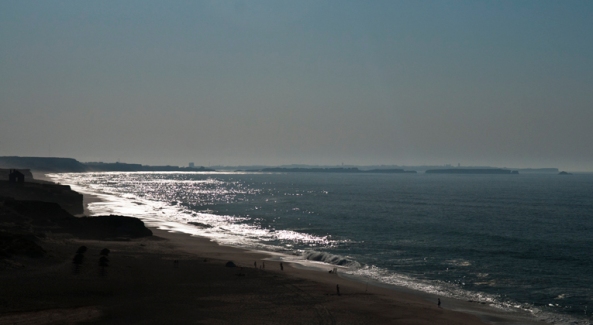 See it? The silver sparkle from where those sunny rays hit the surf?

Surf is indeed a keyword on this coast. Every year the ASP World Tour lands on the spectacular Supertubos beach. It is renowned for its continuous feed of powerful barrels. When the surf competition is on, the area is full of that laid back buzz which surrounds the likes of champion Kelly Slater, John John Florence and Owen Wright.

Here’s John John Florence and his spectacular surfing family kindly posing for a photograph outside the Praia d’El Rey Merriot:

The boys below can’t adorn themselves with being professional surfers, however, they can brag about having one of Europe’s best beaches on their doorstep!

Once you’ve got your surfboard, the waves are FREE!

There’s plenty more to do along the Silver Coast if you’re not up for surfing. There’s golf (Seve Ballesteros designed one of the courses before he passed away), horse riding (on the beach just like in the movies!) and gourmet food. But we would be chewing over far too much if we tried to cram all that this lovely place has to offer in one post. So if you’re up for a different Portugal experience, stay tuned for our next Silver Coast update in one weeks time.

We have previously unveiled some of our preferred places in the Algarve. They have the same unspoilt character as the Silver Coast, and are a secret we reluctantly shared with our readers here.

Sometimes the travel industry coughs up new ways to seduce us.  Most of the time they fall back on the same old tactics, like slogans – think ‘Malaysia truly Asia’ – designed to stick in our travel conscious minds.

So when you stumble across something different, it sort of wakes me up and makes me think that it may very well be a place worth visiting. This is what happened when I was doing research for an article about the Algarve. I wanted to pick a great hotel in Sagres, and was overwhelmed when I came across the MEMMO BALEEIRA HOTEL.

I know Sagres, and this hotel has hit the nail on the head. Their promotional video is more about the pulse of the place, and less about the type of duvet covers used. It almost has a documentary feel to it, and what can I say – it makes me wanna go there! It even makes me want to put flippers and scuba tanks on and submerge myself in the wild Atlantic waves… and that says a lot, because I can’t even pick up the guts to go snorkeling without a wet suit on!

I just wanted to share this with you all. Director Daniel Warwick has just gained a new fan, and I can only hope that this is a trend within the world of travel advertising.

Check out the advert and if you fancy a glimpse behind the scenes, and don’t miss the director’s impressive philosophy.